In These Ozark Hills; January 2015

Posted on January 4, 2015 by yarnspinnerpress 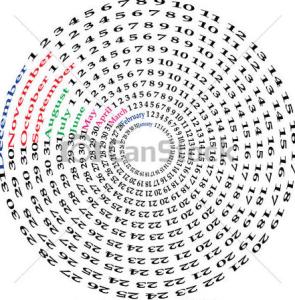 This is Marideth Sisco for These Ozark Hills. Well, wouldn’t you know it. We just got finished celebrating or commiserating about 2014 and here it is 2015, and another New Year is upon us.

Or is it? I’ve been reading up on the calendar, and it turns out the more I know, the less I understand.

You know, trying to create a calendar to accurately keep track of the yearly circuit of this planet around the sun isn’t easy, especially when that planet completes its circuit in exactly 365 days, 5 hours and  49 minutes, give or take a few seconds.

The first attempt at a calendar that we know about in the western world was the Julian Calendar, which, according to an outfit called dateandtime.com, was replaced because it did not properly reflect the actual time it takes the Earth to circle once around the Sun. That’s called the solar year. This meant that as time passed, extra days began to appear spontaneously, at the rate of about one every 128 years. Not something you’d notice before breakfast, but over time they began to add up, so that the date of the equinox, for instance, didn’t fall on the equinox. So cultures around the world, one after another, tried switching to something we called the Gregorian calendar,  It’s where we got a solar calendar based on a 365-day year divided into twelve more or less equal months. Eleven of the months have either 30 or 31 days, while the second month, February, has only 28 days during the common year.

About every 4 years, though, there is a very uncommon year, called a Leap Year, when one whole extra day is added onto that second month, and is when we get the day called February 29. It’s how the Gregorian Calendar accounts for that extra five hours and 49 minutes when the planet is behind schedule.

This was better but still kind of incomprehensible book of days was named after the man who first introduced it in 1582: Pope Gregory XIII. Now Greg didn’t think it up. That was the work of a far lesser known man, an Italian doctor, astronomer and philosopher by the name of Luigi Lilio. He is also little known by an entirely different name, that of Aloysius Lilius. Whatever his name was, and who really cares, he’s the one who thought up the design, but he died before anyone paid any attention to it.

Nobody quite remembers how we arrived at January 1 as the beginning of the new year, but it happened. And so the Gregorian calendar starts on January 1. But it didn’t always.

▪New rules were set to determine the date of Easter.

▪The rule for calculating Leap Years was changed to include that a year is a Leap Year if:

Did you get all that? Yeah. Me neither.

And it got worse. Not everybody made the change at the same time, so for more than a century, everybody was tinkering with the days on and days gone. And then there’s that Anno Domini or “the year of our Lord” business. You see, the dating system we use in the West is based on someone’s best guess as to the date when Jesus was born. There was no year zero, bc or ad,  when that was set up. The system started directly at 1 AD. This all happened during the early middle ages, and for a while people just picked their favorite feast days to begin the year: Christmas, Annunciation, or Easter. Thus, depending on where you were, and when, the year number changed on different dates. Fortunately, in several places they settled on January 1 even before they settled on which calendar to use.

Citizens in England were surprised to discover that the year 1751 was only going to have 282 days, which would begin March 25 and end normally on December 31. Ok so far. 1752 was all set to begin on January First. But according to the Gregorian calendar, in addition to settling on a new day to start the year, the calendar at some arbitrary point, had to be advanced by 11 days. So they did it. They went straight from Wednesday September 2nd, to Thursday, September 14. They had to do it so Easter would be in the right place, they said.

After that, things began to settle down, and now about all people have to deal with is remembering which of those danged months have 30, and which have 31.

If I had more time and all of us had longer attention spans, I’d tell you about the Chinese calendar and their New Year, the Jewish calendar and its New Year and a bunch of others.  But I think it would just wear us out. And there’s still all those turkey and ham leftovers to deal with.

Instead, I’ll close with a helpful hint on how to keep all those months with uneven days straight. There’s a little jingle I learned from my parents, who believed there was never a good song or saying that couldn’t be made more ridiculous. It goes like this;

April, June and No Wonder.

All the rest have 31 except Grandma

And she drives a Ford.

This is Marideth Sisco for These Ozark Hills, saying – May all your days be merry and your new year, whenever it starts, be the best one ever.

1 Response to In These Ozark Hills; January 2015