Posted on March 9, 2015 by yarnspinnerpress 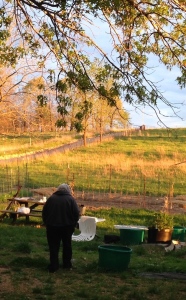 This is Marideth Sisco for These Ozarks Hills. Living in the Ozarks, it pays to be weather wise. We expect March to come in like a lion, and this March has proved no different. I’ve not been out but three times in as many weeks. Living in the country, alone, and at the road’s end, I’m careful about the weather.

I shouldn’t complain, especially when the eastern seaboard is in such a horrific mess. It’s not nearly that bad here, it’s just miserable.

The ironic thing to me is that, although I like living by myself and may spend weeks puttering around happily unaccompanied at home, the very fact I can’t get out makes me miss everyone horribly. I may not go to church for weeks, but soon as the ice sets in, I long for it, from the rituals all the way to the desserts. I miss just about everybody.

And has anybody noticed that in just eleven days we have to plant peas and potatoes? I’m not sure the Ozarks commandment to plant spuds on St. Patrick’s day applies if you’re not Irish, and my forebears are mostly Scottish and English and Cherokee. But given the patchwork nature of our culture, I’m pretty sure there must be some Ulster genes in there somewhere. And yet who in their right mind, whatever their ancestry, would set foot in the garden as it will be next week, when the thawed and saturated earth means mud deep enough to steal your shoes.

On the other hand, it makes me very grateful I decided in mid-winter to plant a smaller garden in the coming seasons. I realized I really don’t have to feed the multitudes. Even at half its size, my garden can feed more than me. And this extended period of houseboundedness has made that even more clear. Every time I go to the freezer in search of something for supper, I must face the more than 40 lbs. of perfectly good tomatoes I just couldn’t let go to waste, even though I’d already put up a year’s supply of salsa and sauces, and I was thoroughly tired of the process. They’re for soups and stews, I said, unwilling to just heave them over the fence. Now it’s March, and I haven’t touched a one. Nor have I even once made stew.

Thus we are imprisoned by our own ancestral habits, learned from our Depression Era parents and pioneer Grandparents, whose vision did not stretch far enough to imagine an excess of food. Even if we had enough, there were our neighbors to consider. They might have fallen on hard times, or failed crops or illness. Or they might just have been foolish and profligate. In either case, without help from those more fortunate, they might starve. In those days, we understood that.

Some while back, while visiting with a group of folks talking about those times, they said of the woman who then owned the little town’s grocery store: “She nearly lost everything trying to keep everybody fed. Without her, many of us would have just starved to death.”

It reminded me of another conversation with a Native American friend while watching the news, where a hefty, well dressed fellow was being named the new chief of some tribe.

“That’s no chief,” my friend said. “Look at him, that suit, that car. You’d never see a real chief looking like that. Chiefs have one job. Taking care of their people. If he was chief, someone else in the tribe would have needed that suit, and that car, and the dinners he’s had way too many of. He’s not taking care of his people. He’s just taking care of himself. A chief doesn’t do that.”

Thinking about all that, I realized that my large garden has its origins in my own parents’ little grocery in Butterfield, which they lost because they couldn’t bring themselves to deny credit to people they knew were going hungry. Behind the counter we had books full of itemized groceries that would never be paid for. But we also had neighbors whose children were hungry, while my mother had a steady job as postmaster. So we had plenty, as long as it lasted.

It took me decades to understand why my grandmother said every year, with a satisfied smile, over the mounds of produce that poured from our own garden. “Enough is enough,” she proclaimed, and then never failed to add: “And too much is plenty.”

We lived next to the railroad tracks, you see. And along with neighbors in need, she fed every passing hobo. And always had. It’s what neighbors do. We learned plenty from her.

I’m confident that I’ll still have plenty in my downsized garden, if I can ever get into it. In the meantime, if I can make it out to the store before the next round of miserable weather, I guess it’s time to make stew, and with all those tomatoes, I can make plenty. This is Marideth Sisco, in a stew over the weather in These Plentiful Ozark Hills.