Torino – Wednesday; If I had been able to post!

Posted on December 13, 2010 by yarnspinnerpress

﻿﻿Ok, first off. Here is the first of the posts I couldn’t send. 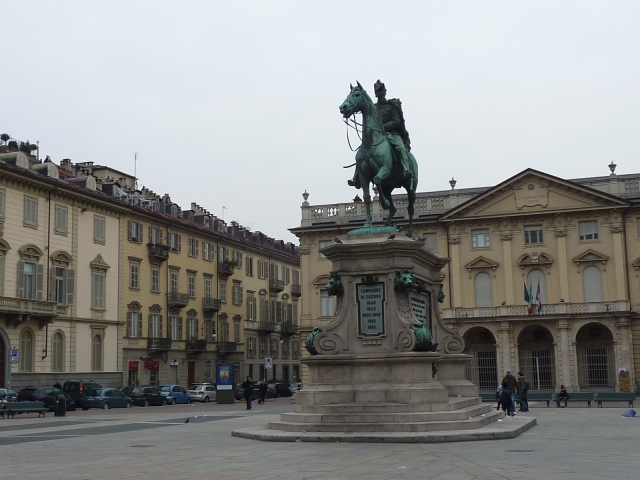 Late-late Wednesday, hoping the internet is more hospitable in the wee hours. I suspect not, as there’s an Italian woman behind me at the other computer, muttering to herself. 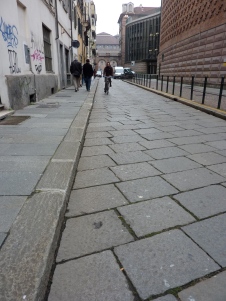 Just a little word or two more on the streets, and other things Italian. I’ll have pictures to go with this someday in another universe where computers do what the hell you tell them to. But for now, the streets, buildings, sidewalks, curbs in Torino are in granite, from the wildly decorated and enhanced to tiny (maybe 3″ square and one or two inches thick) cut granite cobbles and parts of cobbles used to fill in any irregular places. I had to laugh today, and stopped in the street to get a picture, when I realized that except in rare occasions, even the manhole and utility covers are delicately cut granite circles with even more delicate little vents. And drainpipes also seem to be generally used just for moving large quantities of effluent. Simple shallow troughs cut in the granite, or cut to fit between slabs, move surface water around. 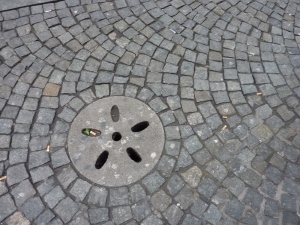 I want to mention that old joke about heaven and hell that makes the Italians the engineers in hell. But I believe I have in their clever uses of stone evidence to the contrary. Now organizers, that’s another thing. I’ve noticed with the festival crew that anything other than what’s been specifically scheduled and written in the book is not simply disallowed. It doesn’t exist. When someone suggests 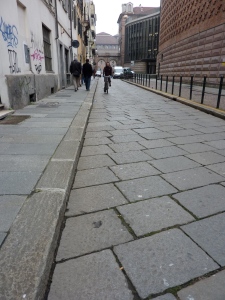 doing anything impromptu to the on-site, at the theater, lieutenants, there is simply a slight, awkward pause, as happens when an unidentified person farts loudly in a crowd, and then the conversation moves on. It’s kind of charming, actually. Fortunately, we are blessed with having a guide/translater/tender, a 40-ish woman named Laura (pronounced here Louw-rah) who not only gets us everywhere on time but helped us find the neighborhood trattoria (country-style restaurant) of our dreams. We may try to go back there because it was all so delicious. If we can find it without the guide and get there when it’s open. Still confused about when things open and close. Right now, I’m content to close this and see if I can send it. Wish me luck.

1 Response to Torino – Wednesday; If I had been able to post!