Updates on “What About Me!”

Posted on November 21, 2010 by yarnspinnerpress 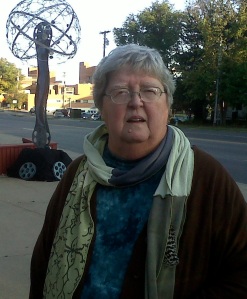 Howdy all – Well, some months have gone by since this blog came on line, and much has happened. The movie Winter’s Bone is over $6 million in sales, it’s still in nearly 100 theaters, and the soundtrack is out on digital, with the hard copy coming soon. Debra Granik and Anne Rosellini have won the Humanitas Prize for best Screenplay, and the word Oscar is being batted around rather freely in all quarters.

The summer was busy for me, with appearances from Memphis and Tulsa to the Museum of Modern Art in NYC, promoting the film and sometimes taking members of the band along to perform. The whole thing has been a once-in-a lifetime experience for this old hillbilly gal. But it’s still fun, every day.

Just got a photo from a friend, Amy Buffington-Gomme, an Ozarks girl who now lives outside London. It’s the larger-than-life billboard of Winter’s Bone that’s recently appeared at the entrance to Knightsbridge Tube Station in London.  This pops out right in front of the world famous Harrods Department Store. That’s Amy on the right.

And about that soundtrack, you can get a hard copy by ordering from this site a little sooner than the release date, if you like. See below for shipping details.

Also, my book of essays, These Ozark Hills, most of them taken from my radio show, is now available. Here is the ordering info , and  read the excerpt .

My official bio says I’m a veteran journalist, teacher, author, musician, student of folklore, and creator of Elder Mountain Press, a venue for publishing stories relevant to Ozarks culture and history. It makes no mention of my absence of mind or my widely known penchant for confounding myself and others, and collecting scraps of mostly useless knowledge. I could create a paper mache Volkswagen with the paper this generates.

People who don’t know me believe I’m a storyteller. People who do say I’m just windy. But both kinds will stop for a moment to listen to my little essays on public radio …Read the rest of  What About Me!

2 Responses to Updates on “What About Me!”